The Saugeen River is a huge river system and probably the nicest river I’ve seen for brown trout, brook trout and resident rainbows in Ontario and is one of my favorites for drifting down in the boat. The sections where the resident trout reside can be over 50 feet wide and offer all kinds of great water to fish. Most trout rivers in Ontario where the trout reside are less than half that size.

The lower half of the Saugeen is well known for it’s large steelhead runs, salmon runs and it’s bass and musky fishing. These areas can be over 100 feet wide with deep pools and fast water.

It’s about an hours drive from Orangeville or 2.5 hours from Toronto but is worth the drive, and the extra distance from the city often keeps some of the crowds away from the trout sections. The lower river is about 3 hours drive and attracts a lot of attention from local anglers and can get busy at times.

In both the trout and steelhead sections it offers anglers fast rapids, long slow meadow sections, deep pools and good hatches in the spring and early summer.

This is a river that will challenge any angler but it’s shear beauty and the potential for huge brown trout, brook trout and resident rainbow trout is something you don’t want to miss. 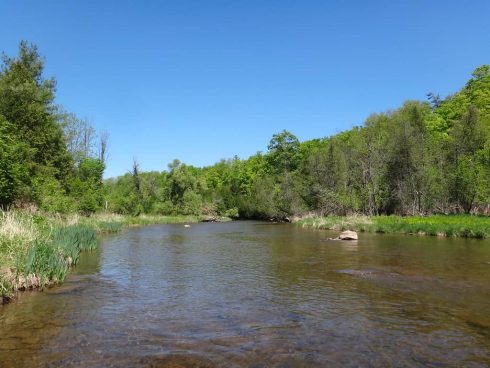 The upper sections like this one was full of brook trout the last time I was there.

The further up into the trout section you go the smaller it gets and it starts to resemble other rivers like the Credit River, Beaver River or the Humber River trout sections with an average width of about 15 to 25 feet.

This river might have one of the longest stretches of river that has cold enough water to have brown trout, brook trout, and rainbow trout in the same sections.

Down near the bottom end of the trout sections, it is big enough to get a drift boat through early in the season when there’s still good water flow. During July and august the river in these sections can warm up to much so fishing is limited to very early mornings or just before dark. The water levels can also drop at this time making drift boat trips impossible.

The brown trout in the upper sections can get up to to 30 inches but they don’t come easy and they will make you work for them.

At one time the local fishing clubs and the OMNR worked together to stock the river with brown trout and rainbow trout. They also did stream restorations and incubation boxes to help improve the trout numbers. During this time the fishing was great and many trout in a day could be caught. As I’m told now by some local land owners along the river, the OMNR has put a stop to most of this and the fishing has gone down hill.

My experience on the river also shows that the fishing is slowly getting worse and it’s harder and harder to consistently catch trout here. This is one of the reasons that I do not guide this river as much as I used to do.

It is my opinion that if the OMNR made some sections of this river catch and release only like they do on the Grand River and Credit river this could be a fantastic trout river again. 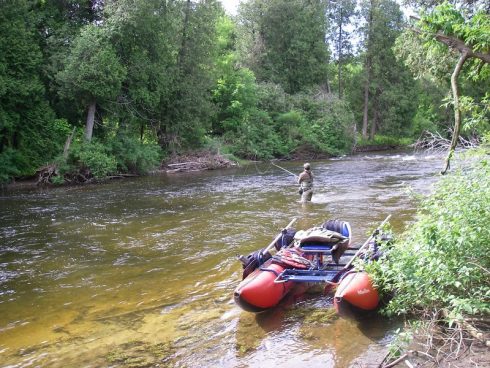 In the lower river you have opportunities to fish for steelhead, salmon bass, pike and musky in pretty good numbers.

From early July to early October there is good fishing for the resident bass, musky and pike in the lower sections of the river below the town of Walkerton.

Steelhead are in the river in good numbers in late October, November and December and will continue to be steelhead some years until late May. There is lots of time and lots of water for chasing big hard fighting steelhead 8 months of the year on this river. It is estimated that some years the Saugeen river gets a huge run of up to 40,000 steelhead. The steelhead of the Saugeen tend to be large and fight hard.

There are year round fishing sections  and extended season sections and the most popular section these times of year is an area known as Denny’s Dam which is close to South Hampton near the mouth of the river.

This is a large river in the mouth section with plenty of room for both the steelhead and the anglers.

During the fall there is extended season sections that allow anglers to fish a large portion of river occupied by steelhead, salmon, bass, musky and pike. Check the current regulations, but as of now 2019, the river is open until December 31st all the way to Walkerton.

I guide the Saugeen river by foot or by boat, but drifting the limited access water sections of the upper Saugeen in a comfortable stand up pontoon drift boat is my favorite and gives anglers the opportunity to see some of the nicest and scenic water in Ontario and a chance at some of the biggest brown trout in the river. 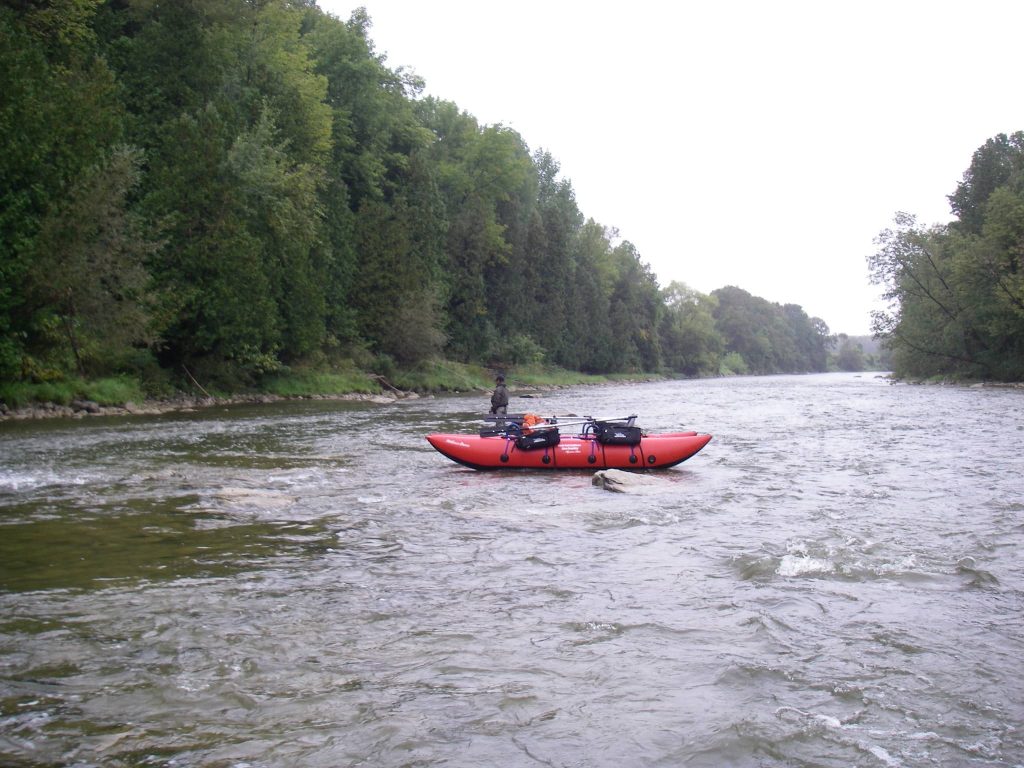 The Saugeen has many, many tributaries streams and rivers that can have good fishing fro trout, bass and pike and some that can also get runs of steelhead.

There are a few damns along the river that may prevent the salmon and steelhead from accessing some of these tributaries.

Some of these tributaries have extensive warm water sections and are mostly bass and pike.

I’m not going to cover all those rivers but for more information check HERE and HERE.

Other Species – There is also a large population of catfish which may also be known as channel catfish. These fish can average 6 to 8 pounds and some may get up to 20 pounds. These large catfish reside mostly in the lower sections of the rivers and are normally caught on dead bait type presentations. There is also a good population of Carp that can be over 20 pounds.