Size: Although Ontario’s record brook trout was 14.5lbs which I think is also a world record and was caught in the Nippigon river in Northern Ontario, most brook trout in most southern Ontario rivers average about 5 to 7 inches in size and a 12 to 14 inch fish is considered a fairly big fish.

There are even a few rare reports of fish over 18 inches (5;bs to 7lbs) in some rivers near us. In fact I have a mount on y wall of a 6lb brook trout from a river less the 30 minutes from my home.

Unfortunately most big brook trout that get caught are harvested which depletes the amount of larger fish therefor it is very important to release your trout so the can spawn again.

Food: Brook trout in rivers can feed on almost anything that is alive in the river but their main food sources include insects, small fish, crawfish, leeches and worms.

One of the easiest ways to identify a brook trout is by the spots which are often red or orange with a blue halo around them and the vermiculation’s which look like a worm pattern which is often most predominant on the back.

If you look close enough you can see the vermiculations in the pictures. you wont see these on brown trout or rainbow trout.

The bottom of the fins are also outlined with a white stripe and black stripe as seen in the pictures. 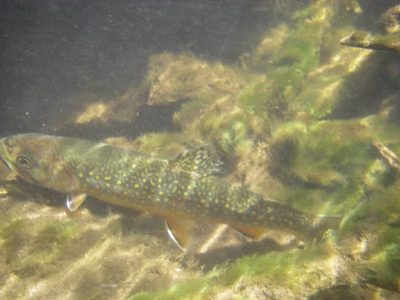 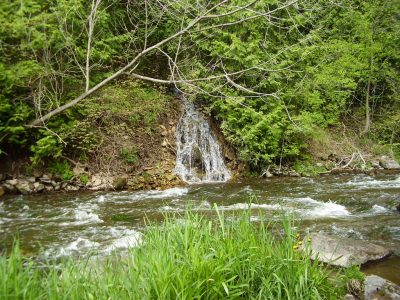 Brook Trout Habitat: Brook trout can be found throughout the river, in the middle, off to the sides, in deeper slower water and in shallower faster water.

On some of the bigger streams like the one in the picture it’s common to find them anywhere  there is a break in the current or a slight increase in depth.

River brook trout require some flow to bring them cool oxygenated water, food, and cover or security where they can get away from any danger. As with most trout they are often found in seams and current breaks where there is a concentration of food flowing past them but the best seams have some depth or cover to offer them some security. Brook trout will also use rocks, logs and trees as cover and the biggest trout are usually found near log jams and deeper water. Brook trout can also be found in rapids and pocket water . The rivers in the pictures below are all good examples brook trout water.

Temperatures: Brook trout tend to be most active at certain temperatures. The optimal temperature range for feeding is about 50 to 66°F (10 to 18 °C) but they can survive and be active from 35 to 68 °F (2 to 20 °C). Even though the temperature may be in the perfect range there are times when a rising or lowering temperature may stop their activity and feeding. One word of caution is to not fish for brook trout or brown trout above 67°F / 19 °C because doing so can seriously stress the fish out or even kill them during the fight.

Rivers with lots of up-welling’s or springs like the spring water fall picture bring in cool water which is great for brook trout because it keeps the river cool all summer and that keeps the fish more active.

Spawning: Brook trout spawn in the fall during the months of October and November and prefer to spawn on gravel sections of the river.

Catch and Release: Who am I to say that it’s very important to release all your fish when the OMNR allows you to legally keep 5 fish.

After fishing Ontario rivers and some USA and BC rivers for the last 32 years I’ve seen first hand the importance of releasing all fish and the difference it can make.

Ontario’s Best Brook Trout Rivers: There are many brook trout rivers and creeks in southern Ontario for anglers to explore and we guide a few great ones. 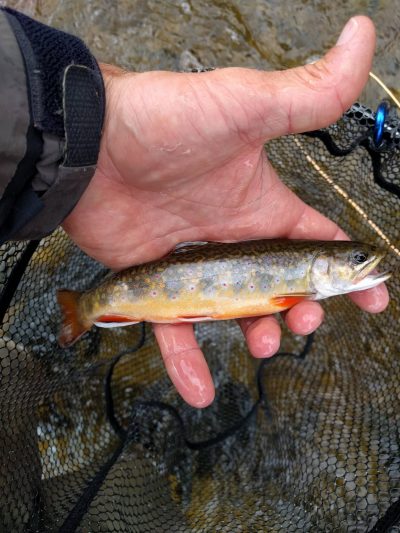