Nymph For More Trout and Steelhead

If you want to improve your river fishing skills and start catching way more fish, then we are the right guide service for you. 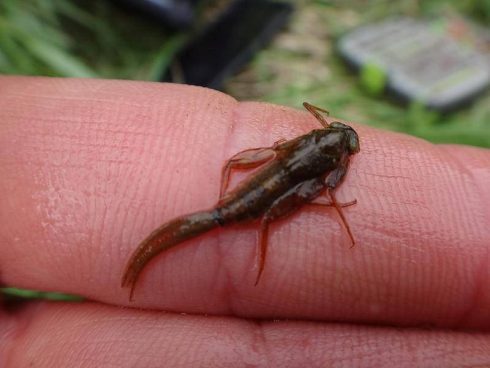 What is a Nymph?: A nymph is an aquatic insect that lives part or all of it’s life in a river or a lake.

Nymph species come in a variety of different sizes and colors. The most common nymphs to know as fly anglers are the StoneFly Nymph, the MayFly nymph which is seen in the pictures, and the Caddis Larva which looks like a green maggot.

A certain time of year these nymphs will reach a point in their life cycle when they will leave there home in the rocks and emerge, swim or float their way to the surface and transform into the fly adult. This is known as a hatch, and can be a fantastic time for trout to gorge themselves.

What is Nymphing: Nymphing is when a fly angler uses an artificial fly known to anglers as a nymph, as seen in the picture, and that nymph is drifted below the surface of the water to entice a strike from a trout, steelhead or salmon.

Today I focus on what I believe to be the most effective methods of nymphing for trout and steelhead in our rivers. 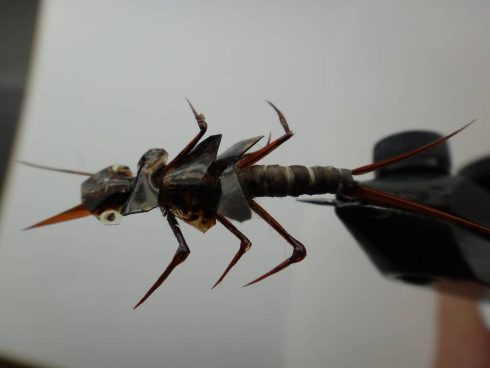 Why Nymph? : Experts say over 90% of a trout’s diet comes from food below the  surface. Nymphs are a huge food source for many trout in Ontario rivers.

Other organisms like worms, crayfish, minnows, or even sunken bugs and beetles can also be nymphed below the surface by fly anglers.

If trout are feeding below the surface over 90% of the time it only makes sense that becoming a good nymph angler will mean more trout in the net and more big trout too.

Learning how to maximize your nymphing is key to catching the most trout and steelhead. 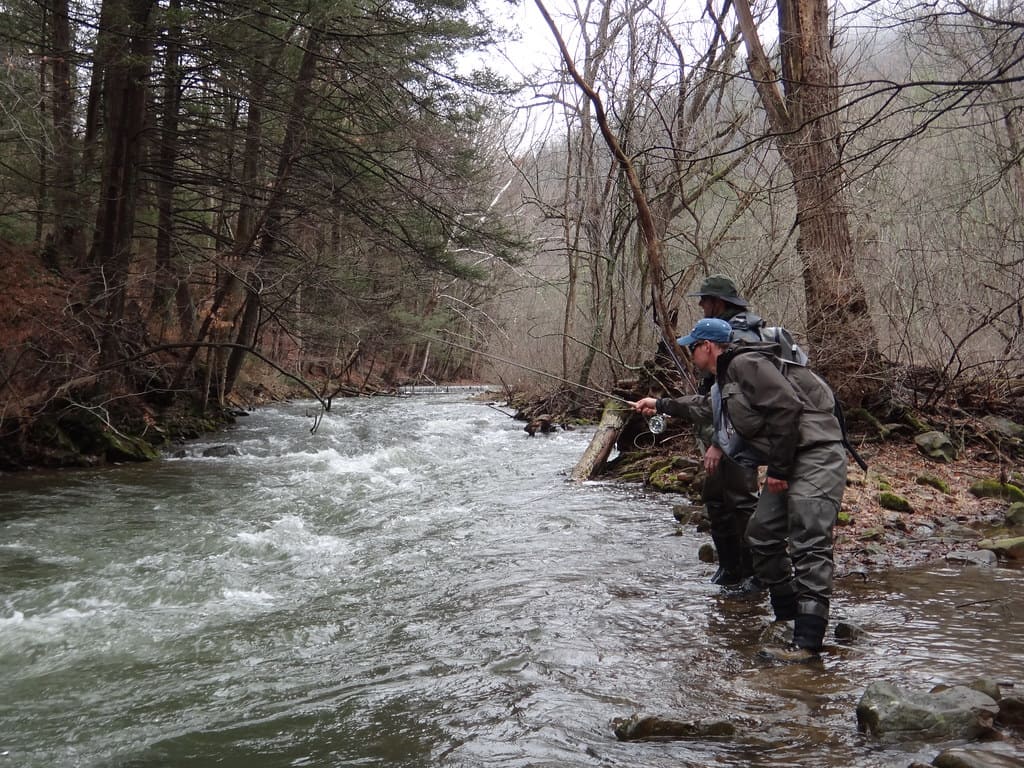 Dead Drift or Drag Free Drift: When nymphing it is important to make sure your flies don’t drag or pull to fast through the water or it will look un-natural to the fish and will often lift the fly up out of the strike zones. Preventing the fly from dragging is called a dead drift or a drag free drift and it is very important for many reason the learn how to do this well. Some anglers use the bubbles to help them match the speed of the current but more advanced angler know this is not always a good way to match current speed because it’s normal for the current down where the fish are to be much slower then the surface current.

The Best Flies for Nymphing: The best flies for nymphing for trout or steelhead are often the ones that you have the most confidence in.

I may catch fish on one particular pattern while other anglers may have good luck on another. One thing I know is that most of the time it’s not the fly pattern that catches the fish, it’s how well you use it.

There is a saying ” a bad fly fished good, is better then a good fly fished bad” and I agree with this 100%.

This is a picture of my steelhead box but many of these flies will work for trout and salmon to.

Some of my boxes hold over 500 nymphs but I’ll often only use the same 20% of those flies.

Some of the simplest flies or the flashiest flies can be the most productive at times. 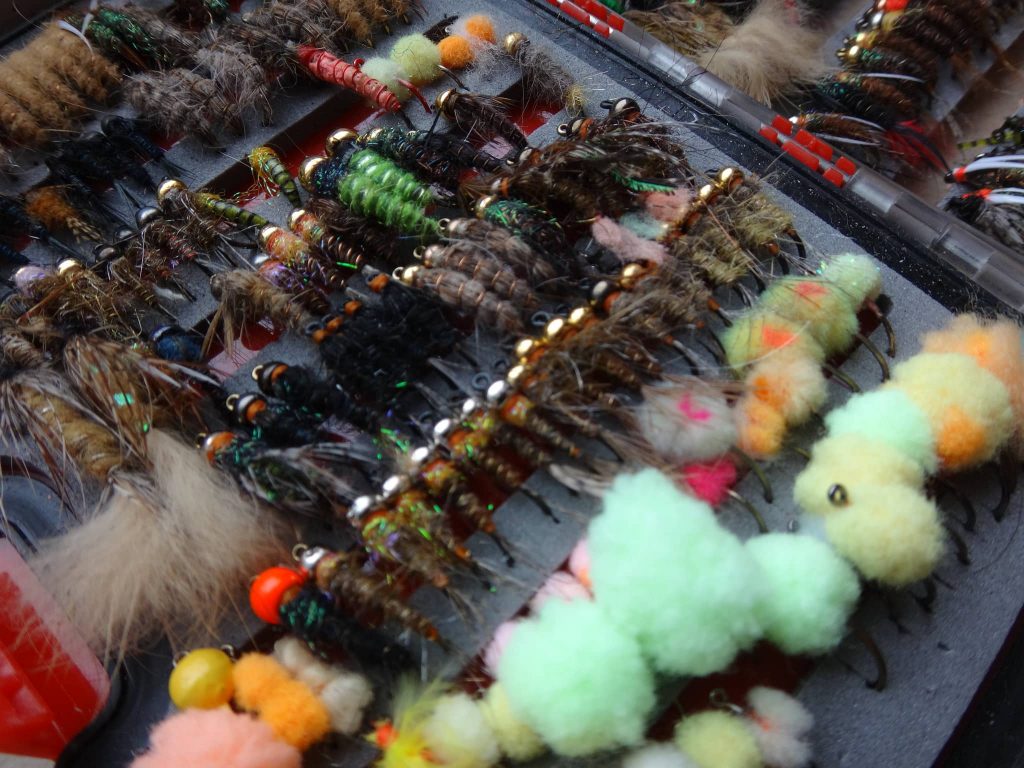 Multiple Flies: In Ontario we are legally allowed to use up to three single point flies on the line at one time (as of 2019), but most good nymph anglers will normally only use 2 at a time. Using three flies can cover more of the water column but it can also become a seriously ugly disaster of it gets tangled.

Weights or No Weights: Generally speaking the vast majority of Ontario anglers will add weights anywhere between 12 and 30 inches up above their nymph to get the nymphs closer to the bottom where the fish are most likely feeding. There are some advanced nymphing methods that don’t use weights to do this and are often better methods when done right. I’ve been know to add weights only 4 inches above the fly with very good success and I also add weight below the fly using a method know as “bounce nymphing” which at times is the most effective method.

Indicator Nymphing: An indicator is basically a bobber or a float and angler uses indicator to help them detect strikes and to help suspend your flies in the strike zone. Indicators can be detrimental to catching fish if they are not used properly and in my opinion of guiding over 2500 anglers most indicator anglers , probably 80%, do not know how to effectively fish an indicator. Not only that but most anglers use indicators when they shouldn’t, and I’ll be honest, so did I for many, many years and this was because that is what we are all taught by the books, by our buddies, by the guides, and that is what the guys in the fly shops tell you you need to do or because new anglers watch other anglers fish and the vast majority all fish with indicators. If you learn when to use and indicator and when not to you will greatly increase the amount of trout you will catch.

Nymphing Rods: You can use any rod you want for nymphing but I like three weight to 5 weight rods with a four weight being my favorite. As far as the length goes the longer rods in the ten to eleven foot rage have some advantages but you could nymph with a rod as short as eight foot. The longer rods aid in casting and allow you to keep more line of the water for better smoother drifts. Many of the fly rod companies are now making extra long nymphing rods which are being made for the average angler and competition anglers.

For steelhead nymphing a seven weight rod in the 10 or 11 foot range should do just fine.

Nymphing Reels: For trout the reel itself is a lot less important then the rod until you start catching a lot more big trout which is when you want to get a reel with a good smooth drag system. It’s even more important to have a great drag when you are fishing for large steelhead. I personally hate reels that require an angler to palm the reel and I have witness to many occasions where these types of reels are the reason for over played fish or broken off fish.

Fly Lines for Nymphing: You can use any standard float line for nymphing but there are fly lines specifically designed for nymphing. These lines could be just for indicator fishing and others for euro style nymphing. We do not ever us weighted fly lines in rivers for many reasons.

Leaders and Tippets: A standard nine foot tapered leader is what most anglers use with a small twelve to thirty inch section of tippet tied to the bottom end. I use custom leaders for euro and advanced nymphing which can be up to 30 feet in length.

You can try and sort through every article, book or video on nymphing and then go out and spend hundreds of hours trying to figure out what works in Ontario rivers and what doesn’t.

You can try and find a friend or mentor that can teach you exactly what works for them.

Or, the fastest and easiest way to become a better nymph angler is to find and hire an expert guide that will teach you while you’re out on a guided trip or you could consider taking a nymphing lesson. But be careful because some guide are expert at other methods and not at Nymphing. I’ve been called the nymph guide, the nymph guru, and the euro nymph guide. My reputation is being the guide that specializes in nymphing. As far as I’m concerned I can effectively nymph 12 months of the year and catch more fish than anglers using other fly fishing methods, so it only makes sense to get very good nymphing. 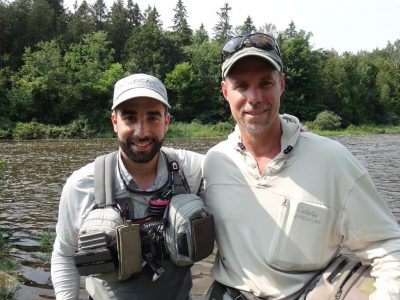 This is a picture of Graham Bristow with world champion fly angler and master nymph angler David Arcay after a nymphing lesson on the Grand river in Fergus Ontario.

I know you can never stop learning and so on this day I had the pleasure of training with David and learning his advanced long line Spanish nymphing methods which all the Spanish competition anglers use to make them some of the best anglers in the world.

There are many different ways to Nymph fish for trout and steelhead. Some angler use indicators that look like little bobbers. Other anglers choose to try traditional high stick nymphing or a combination of high stick and indicator nymphing. More modern nymphing , also know as euro nymphing is growing in popularity because of how well it works at catching lots of trout and more big trout and steelhead.

Other resources for Modern style nymphing:

One of the best books for suspension nymphing and for euro nymphing is Dynamic Nymphing which was written by George Daniel from Pennsylvania. George is recognized as a master of nymphing, a medal winning competition angler and the head coach of the USA fly fishing team. I had the privilege to train with George on both nymphing and streamer fishing and can honestly say his skills and knowledge where exceptional.

The best video I’ve seen for Euro Nymphing methods is called Modern Nymphing  and is done by Lance Egan and Devan Olsen, two exception competition anglers from the USA.

It’s not uncommon for an angler to request that we focus on nymphing because their goal is catch the most fish possible and I’m perfectly fine with that.

If you are like some anglers and prefer to have a guide all to yourself or have just you and a buddy then it’s best to contact us and book a guided trip and just let us know what it is that you want to work on or hope to achieve during you guided lesson. We provide nymphing trips for trout, steelhead and salmon with many of our nymphing methods suitable for all species. 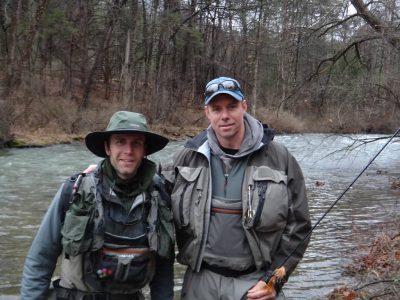 George Daniel and Graham while out doing some Nymphing and Streamer training. See that big ugly fly on the rod!

Guides Tip Of The Day:

Euro Nymphing is a combination of multiple competition style nymphing methods that have evolved into the most effective methods for nymphing for trout. In many cases euro nymphing can not be beat. I know this because I am an exceptional indicator angler, but I’m also very skilled at Euro Nymphing, and because of my skills and experience in both methods I can make an honest and fair evaluation of both styles, and I can easily say that under many situations on Ontario rivers, using an indicator is not as productive as euro nymphing. In fact I have fished with clients and friends and ofetn out fish them 10 to 1 when I’m Euro nymphing and they are using an indicator. My advise is to learn how to effectively fish the Euro style methods for both trout and steelhead.