Steelheading 8 Months Of The Year

Catching Steelhead On A Fly

Steelhead are one of the hardest fighting fish in Ontario and they’re even more fun on a fly rod. Fly fishing for Ontario steelhead can be a challenge for most anglers but it sure is a whole lot of fun and is one of the most rewarding ways to catch these acrobatic feisty fish.

Some days guys call them the fish of 1000 casts and other days you could hook and land over 20, but regardless of how many fish are in the river learning how to fish for them properly, using the most effective methods is the most important thing you can do, and that’s were we come in.

If you have already been trying for them and are still not consistently having success one tip I tell most of my clients is, “it’s not your fly”. A saying I like to use is ” A bad fly fished good, is better than a good fly fished bad”. That basically means that if you’re using the wrong method, or not presenting your fly it doesn’t matter how good your fly is because you’re not going to catch many fish.

It’s not uncommon for me to guide two guys and watch one guy catch all the fish, even if they are both using the same or similar flies. Presentation is key! 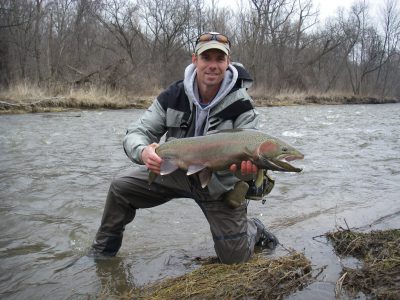 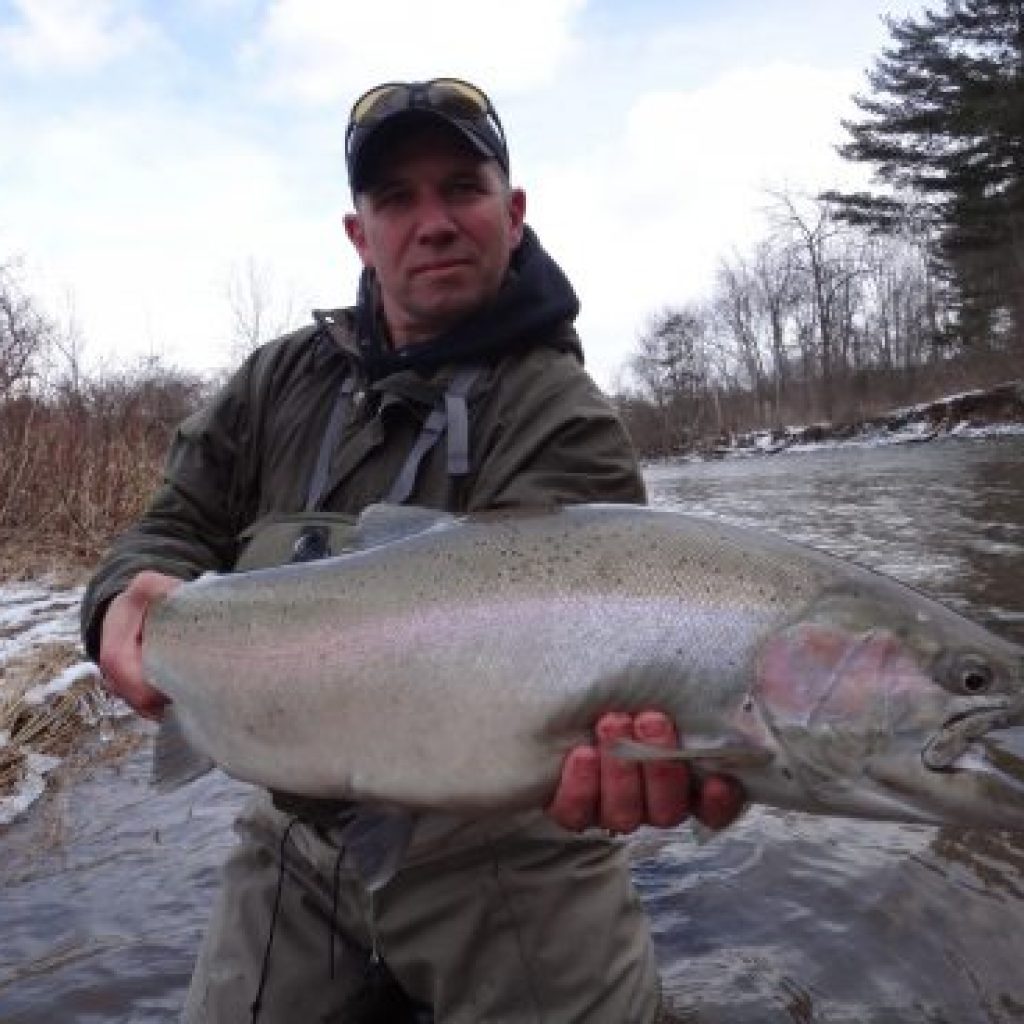 Steelhead fly anglers can target big steelhead in the rivers from early September to late May with the peak times being Mid October to Mid December and then again from Mid March until early May.

Even though most rivers would be closed for the season or would be frozen in the winter some die hard anglers can usually find some open water to fish. Even in the coldest months big rivers like the Niagara, the Saugeen and or Maitland river can often have open water where anglers can fly fish.

There are a few good methods for fly fishing for Ontario steelhead.

When most people think of fly fishing they often think of just trout, but in Ontario our rivers have many opportunities for anglers to fish for salmon for a month or two and for steelhead for 8 to 9 months of the year. 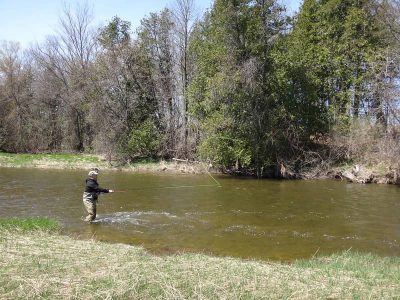 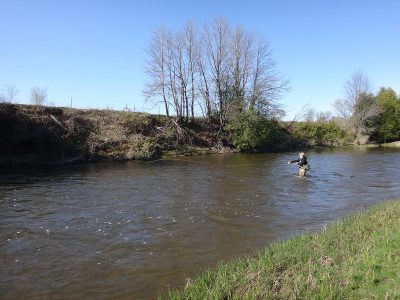 Nymphing for steelhead is likely the most productive way the fly fish for steelhead. Nymphing for steelhead requires a heavier outfit due to the larger size of fish and the bigger rivers. For an average size steelhead river I recommend a 7 weight 10 foot or 11 foot rod for the best line control and fighting ability, and the longer rod also provides better tippet protection by acting like a large shock absorber.

On very large rivers like the Niagara, the Maitland and maybe the lower Grand or Nottawasaga rivers an 8 or 9 weight rod would be fine and maybe more suitable for casting longer lines. A 7wt rod should also have enough backbone to handle even very large fish, larger flies and still be soft enough to cushion and protect the lighter tippets sometimes required just to get the steelhead to bite.

A standard weight forward line, some indicators, split shots and a variety of flies is also recommended. Some anglers and guides are also starting to use Euro nymphing methods with good success.

Fly fishing for Ontario Steelhead can be done with a technique call Euro Nymphing or also know as Modern Nymphing.

Euro Nymphing for steelhead is something new in Ontario. We have been using this method and teaching anglers how to be effective at Euro Nymphing.

If this is something that interests you let us know and we can book you in for a Euro Nymphing Trip.

For more info check out our Euro Nymphing page 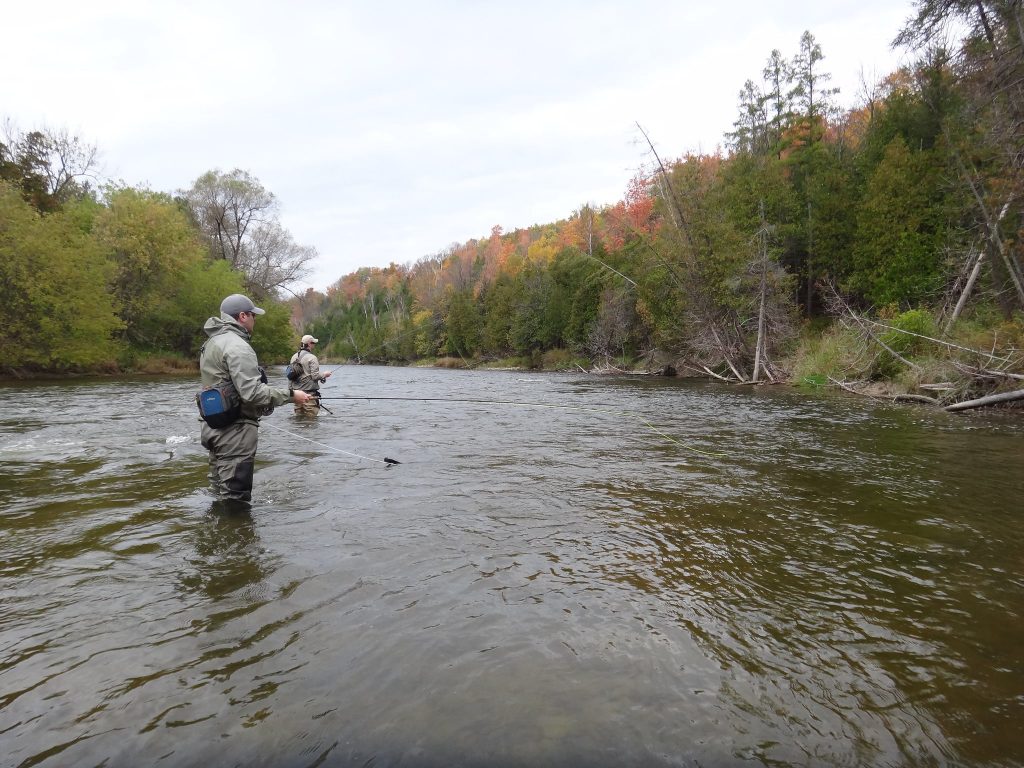 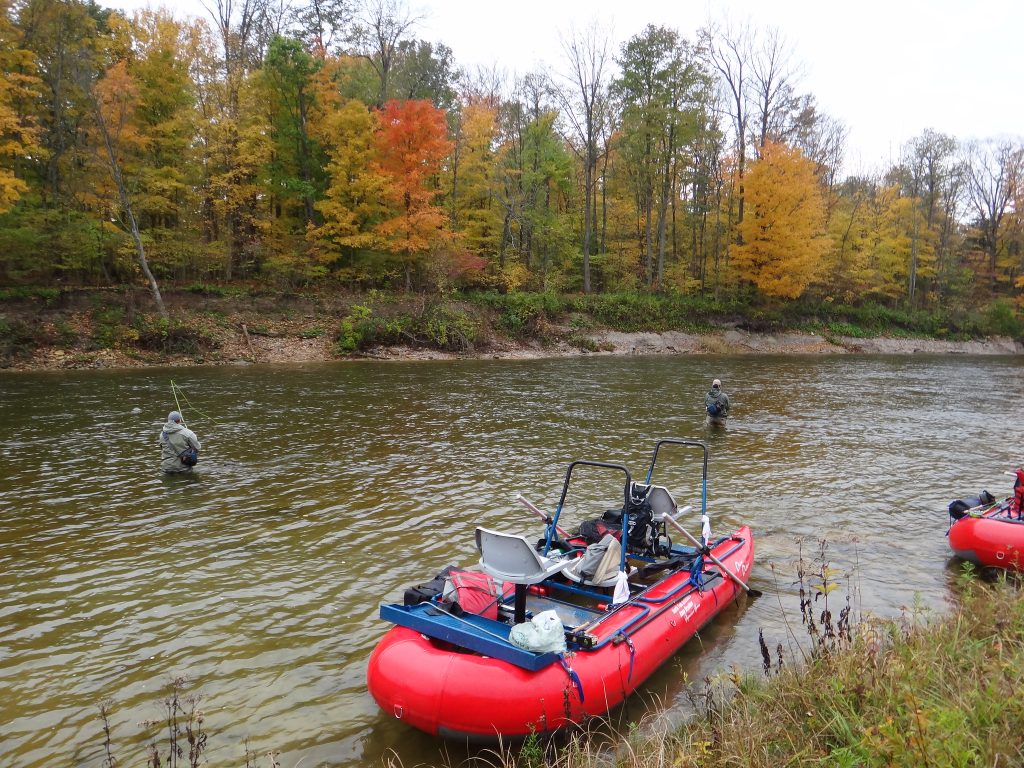 When the steelhead come in they can be very aggressive and chase down and hit properly swung flies. Heavier tippets of over 10lbs are required to absorb the shock of these hard hitting fish. Spey fishing for steelhead in Ontario is much more popular then ever.

Spey fishing uses longer 2 hand rods usually over 12 feet with special Spey lines and special sink tips to get you flies down. Spey fishing requires different casts and presentation. You cast your fly across and swing it from the far side to the near side of the river on a tight line and wait for a fish to grab it.

Streamer Fishing can be done with a single hand rod and regular floating lines or sink tip lines. Streamer fishing requires the angler to cast the fly across and swing it on a tight line or strip the fly in to give it action.

However rare, there are even some anglers in late spring and early summer fishing for steelhead and catching some steelhead on dry flies, either dead drifting them while matching the hatch or skating them across the surface and waiting for those aggressive takes.

We have seen adult steelhead rising for the fist large mayfly known as the Hendrickson. This fly can hatch during the first week or two of May when steelhead are still in some rivers. 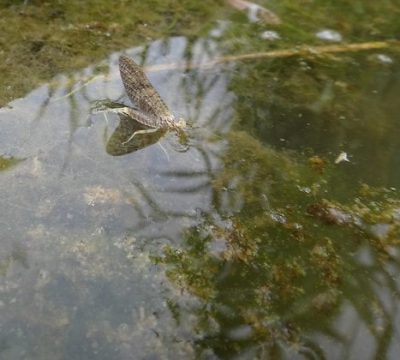 BONUS TIP OF THE DAY

Drag Sucks: I don’t know how many times I’ve guided two anglers at the same time and seen one angler catch all the fish. Why?

Fly fishing for Ontario Steelhead is not as easy as it seams and the unfortunate part is most anglers skills are very basic, and the lack of knowledge limits them from catching more steelhead.

Although there are a few reason for one guy to catch more fish than the other the number one reason is drag, or speed. Drag basically means your fly or bait is being pulled by the current in an unnatural way, often to fast.

Think about it this way. These fish grew up in these rivers and have seen a million pieces of weed, bark, grass, debris, eggs, worms, and insects drift past them and it all moves past them at the same speed, it’s a speed that looks natural to them and a speed they are accustomed to. Then one day they’re sitting down there in their little safe feeding spot picking up the odd chuck of food at that natural and normal speed when this fly (yes, your fly) comes zipping by at 3 or 4 times the natural speed. Do you think they’re going to eat something so unnatural??? Not likely! But maybe or sometimes they will, and it’s the maybe which is the reason why sometimes you’ll still catch the odd fish and why guys keep making this critical mistake of dragging their fly to fats and they never try and change. You ever heard the saying ” even a blind squirrel finds a nut sometimes”. Well, a poorly presented fly catches a fish sometimes too…

Learning to control your drag can mean the difference between no fish or a dozen fish at the end of your day! In fact it’s critical . . The problems is how do you achieve this slower presentation.

One of the most important things I teach my clients on guide trips is proper presentation and how to get a drag free drift. It’s not uncommon for my past students and clients to email me months later thanking me because they’re catching more fish than they thought possible. Fly fishing for Ontario Steelhead can be tough, but it’s tougher when you drag your fly to fast. Learn how to get a drag free drift and you will instantly up-your catch! 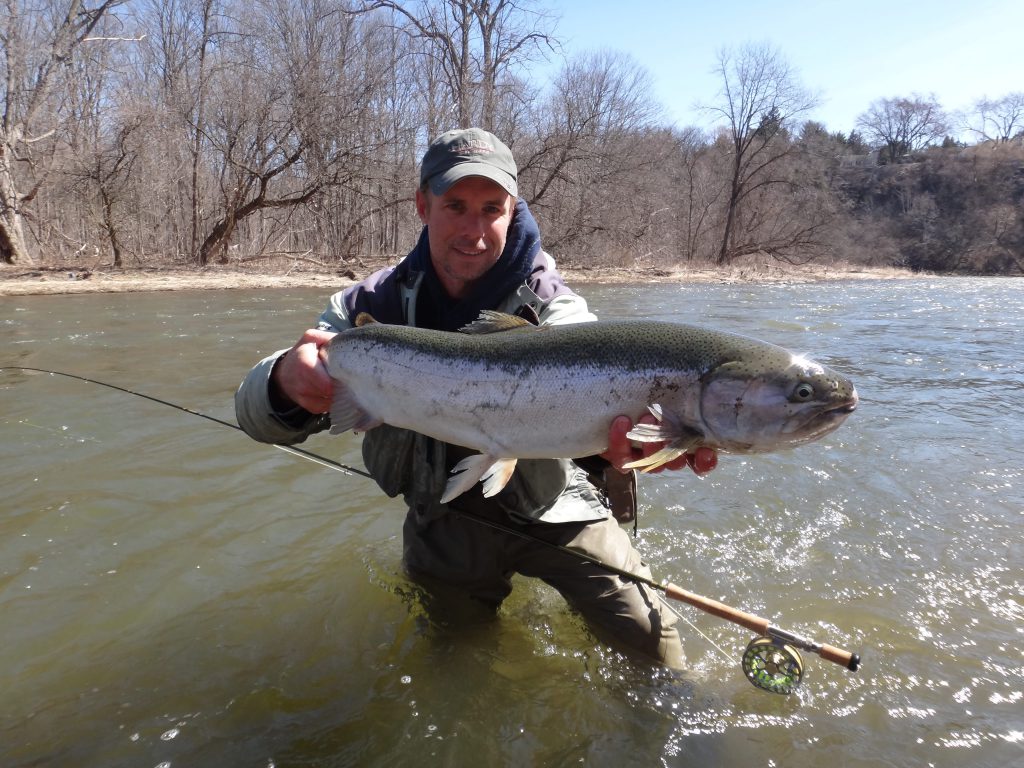 Using the right gear can be the difference between a good days and a bad day.

Check out all my best gear recommendations so you can see what you are missing.